Memory is a funny thing…Sometimes triggers are predictable—any Talking Heads tune transports me instantly back to my college dorm—while other times, memories can hijack your reality out of the blue.

When I stepped into the square in front of the Hôtel de Ville in Poiters, France 22 days ago, I wondered which memories might wash over me.

It had been 32 years since I’d last sipped “un verre du vin” on the terrace of the café on the corner as a California college student during my year abroad. 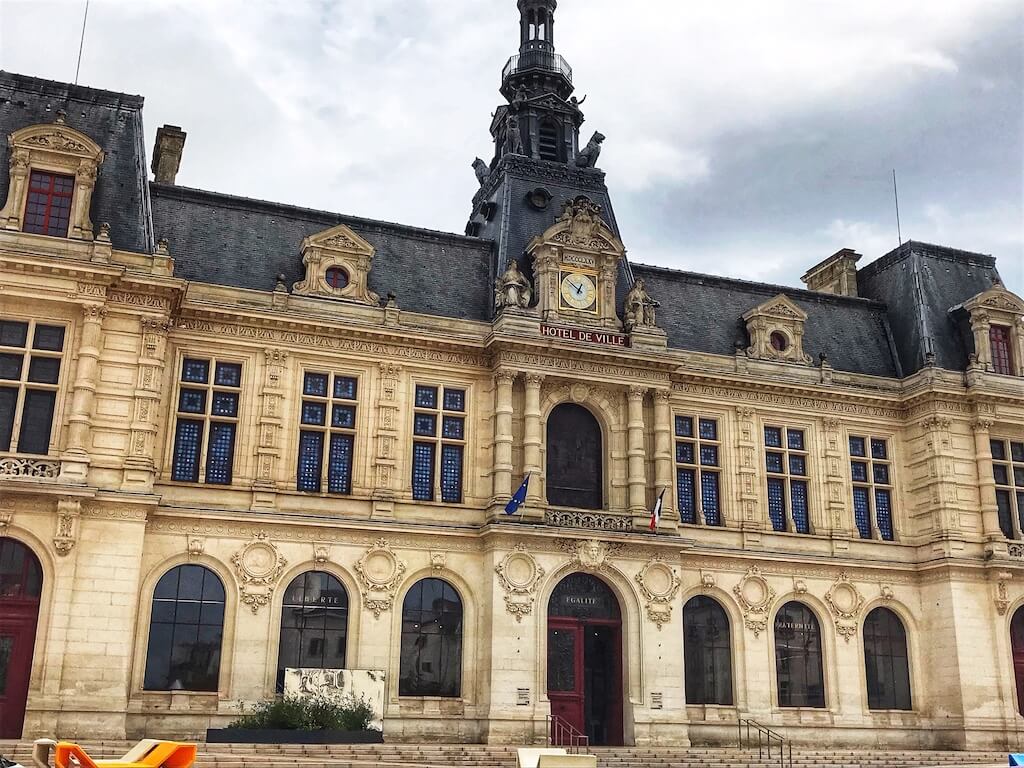 That café is still there.
But my thoughts were quiet. 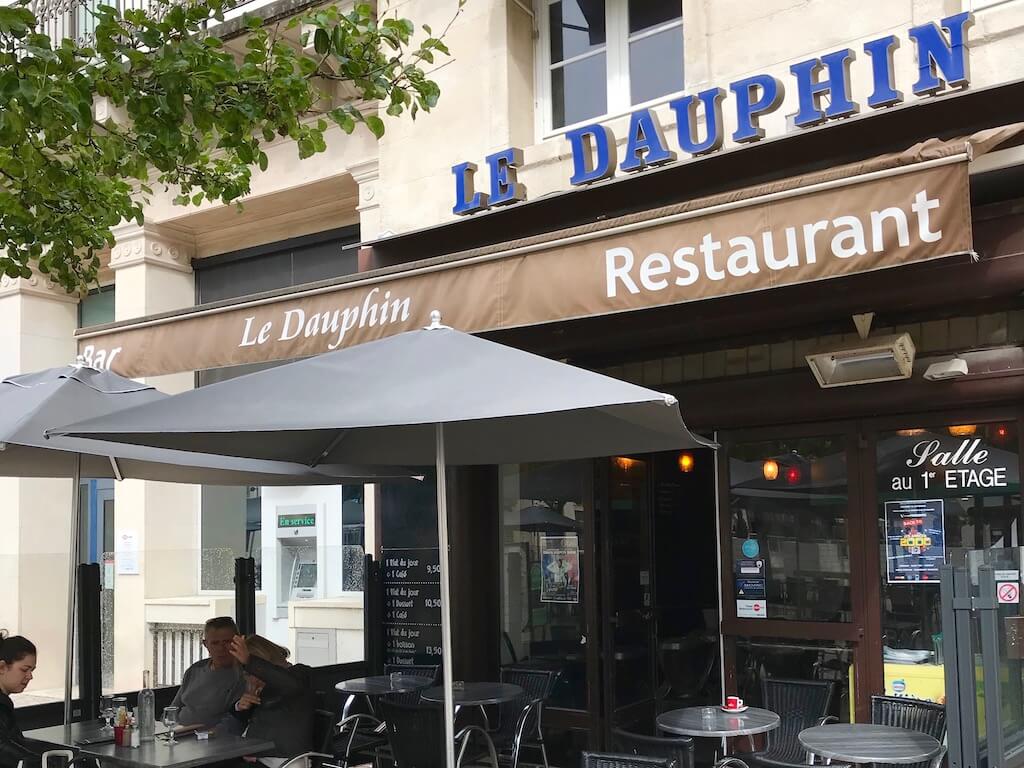 I recognized the silhouettes of the buildings, but the cobblestone streets are all polished now. Poitiers is buzzing in 2019 in a way that it never was in 1985.

No doubt a credit to the steady influx of tourism dollars from nearby Futuroscope, a family theme park that went up a few years after my departure. (Future what? France has changed.)

Interested in other posts on France travel? Read about:

• off-the-beaten track things to do in Paris

• my heritage travel to see the Normandy D-Day beaches

• must-see villages in the south of France

I’d been yearning to return to the Loire Valley to see what had become of Poitiers for decades, but the time was never quite right. I think it was really a yearning to revisit myself during such a formative year.

That California girl who flew across the pond from Santa Barbara was brimming with French fantasies when she arrived for her first glimpse of the Eiffel Tower…starry dreams of foreign lovers, sophisticated fashion choices, and late nights in smoky bars swapping ideas to better the world.

In fluent French, of course. In short, it was permission to try on a different persona. 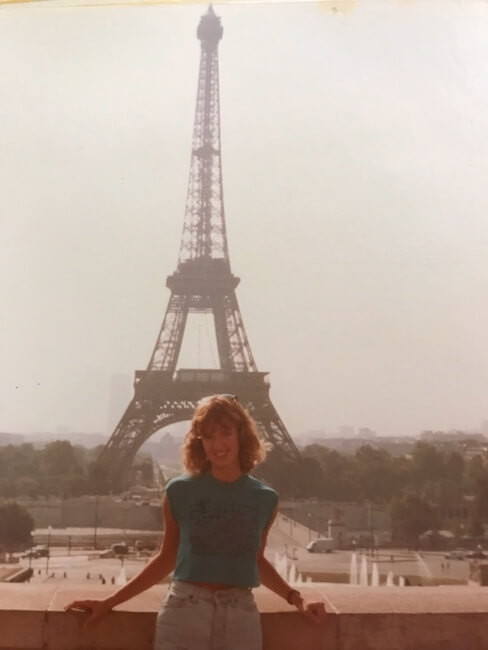 And I wanted to share that fantasy version of my early self with Steve who was along for the ride this trip.

Memory is a funny thing. Have you ever driven through a city you used to live in many years after you moved away? Familiar. And yet… not familiar.

As we nudged our tiny rental car towards 37 Rue des Carmelites where I spent a year living alone in a studio apartment, I glimpsed the old post office on the corner first. 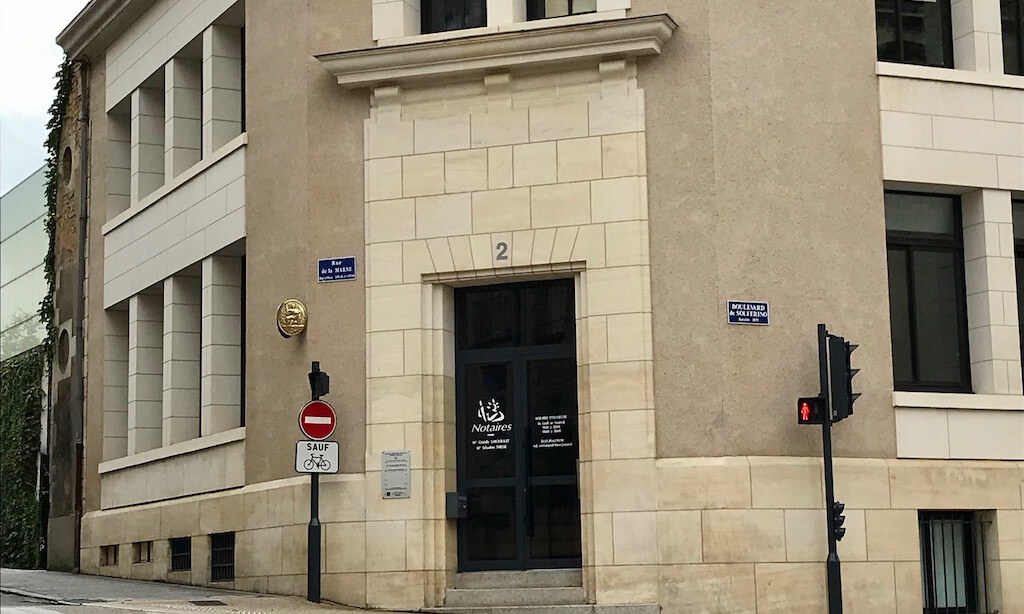 In those days, I used to save up my francs for a phone call home and then feed the hungry meter in the phone booth across the street from that post office when I needed a hug from home. Such an empty feeling when the money ran out and the meter clicked off… 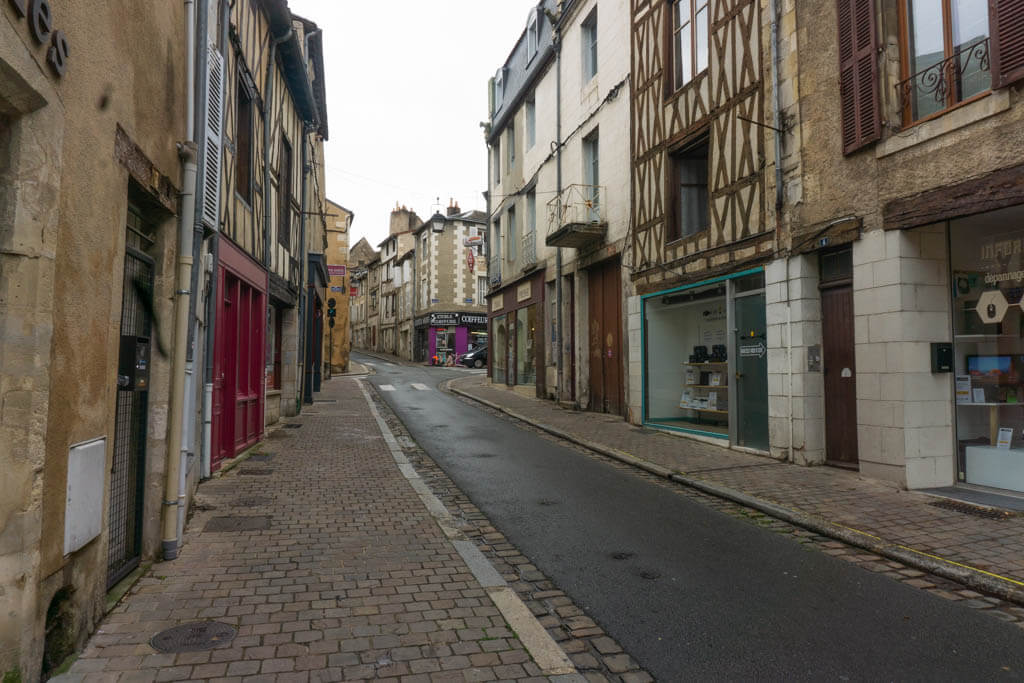 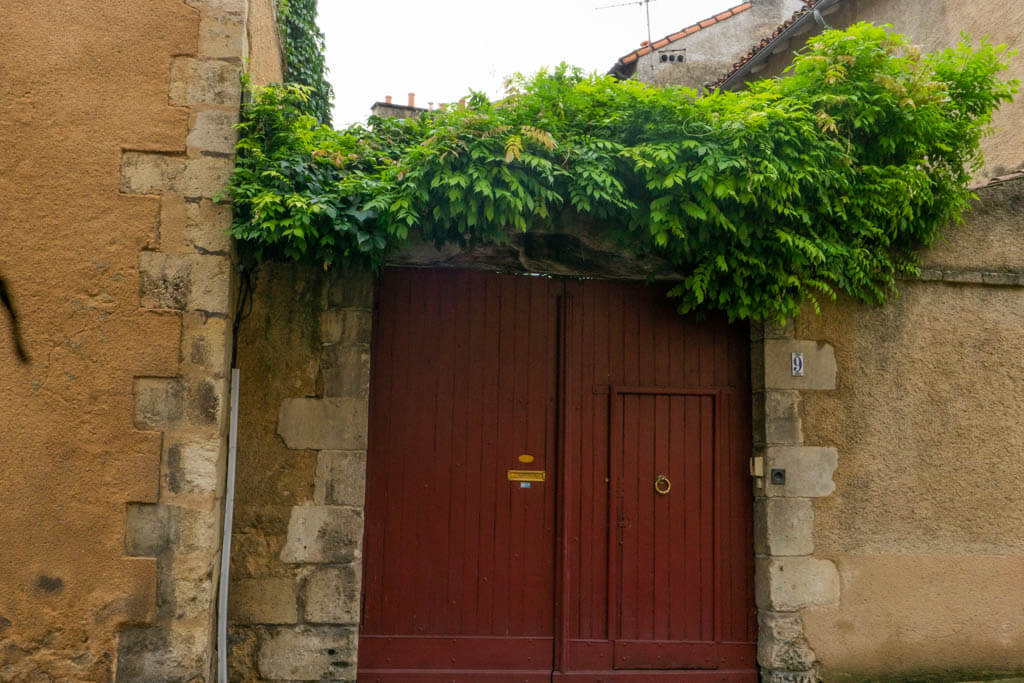 There were no cell phones in those days. Not to mention Facebook…

But quick aside: That experience of absolute immersion was so valuable to both Steve and I during our exchange years—he went to Denmark—that we sent our daughter in high school for a summer to Italy with no cell phone either, to the shock of the other parents.

To be fair, though, cell phones weren’t as indispensable in 2009 as they seem now. Who can live without Google Maps?

I didn’t meet a great love that year in France. And my paltry student budget didn’t accommodate my fantasy fashion budget at all.

What is most memorable about my year there is a stark sense of loneliness. Sure, I went to Rome and Barcelona on school breaks—I even heard the Pope offer a Christmas blessing in dozens of languages live at the Vatican—but day-to-day life is different when you’re living alone in a foreign country.

You still have to chop wood and carry water. You’re just doing it in France.

It can really wear on you when you’re not a native. Everything takes so much effort.

Just as I’d think my French was coming along, a shopkeeper would look at me like I was speaking Martian. Or…I’d be confidently taking notes on the Cold War in class when I’d miss two paragraphs of what was said, leaving a gaping hole on my paper.

French students typically went home to their parents in other cities on weekends, too, leaving my weekends stretching wide open devoid of social engagements. I’d intentionally isolated myself from most of the Americans in town in my determination to become fluent with French friends (which did, in fact, work, but at a cost).

However, it’s fair to say that the Americans proved indispensable on my 21st birthday celebration… seeing as how it was a non-event for French students who’d been drinking since age 14. 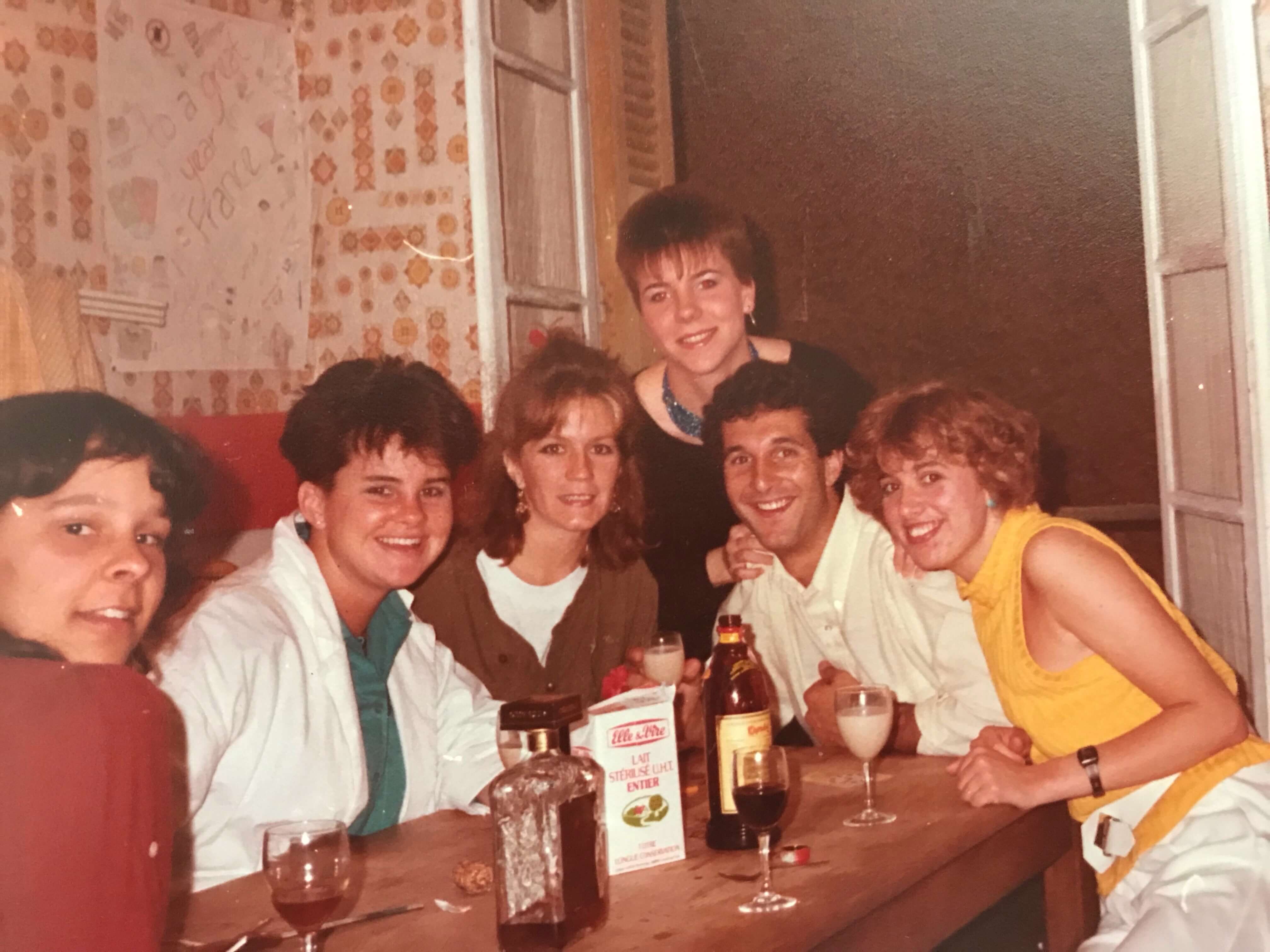 Plus, Europe struggled through one of the coldest winters ever that year. I’d wrap up in my flimsy imitation wool flea market coat or my shabby electric blanket (or sometimes both lol) and watch the icicles drip outside my window.

I thought of all those things as we approached the door to my apartment a few weeks ago.

An older gent smoking on the stoop next door sized me up as I approached. When I told him I was making a brief stop to revisit my past at 37 Rue des Carmelites, he said he’d lived there since 1967! (“And I bet his wife makes him smoke outside these days,” said Steve.)

The door to the apartment is still maroon like it’s apparently always been. But I’m pretty sure it hasn’t been painted since 1985. Possibly because the apartment still rents out to students just as it did then, according to my neighbor. 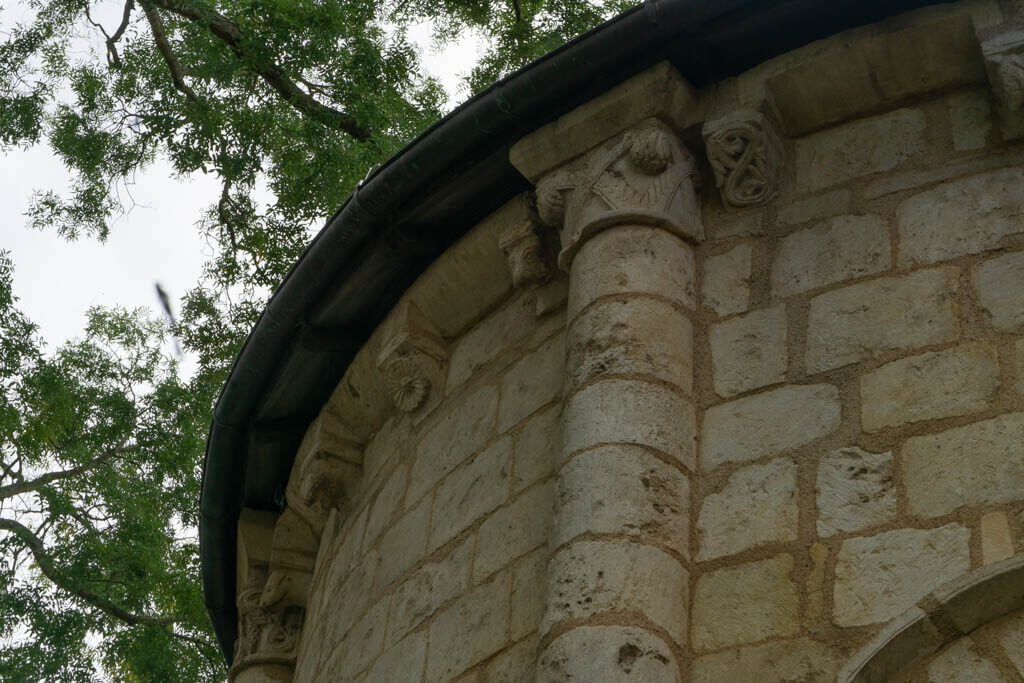 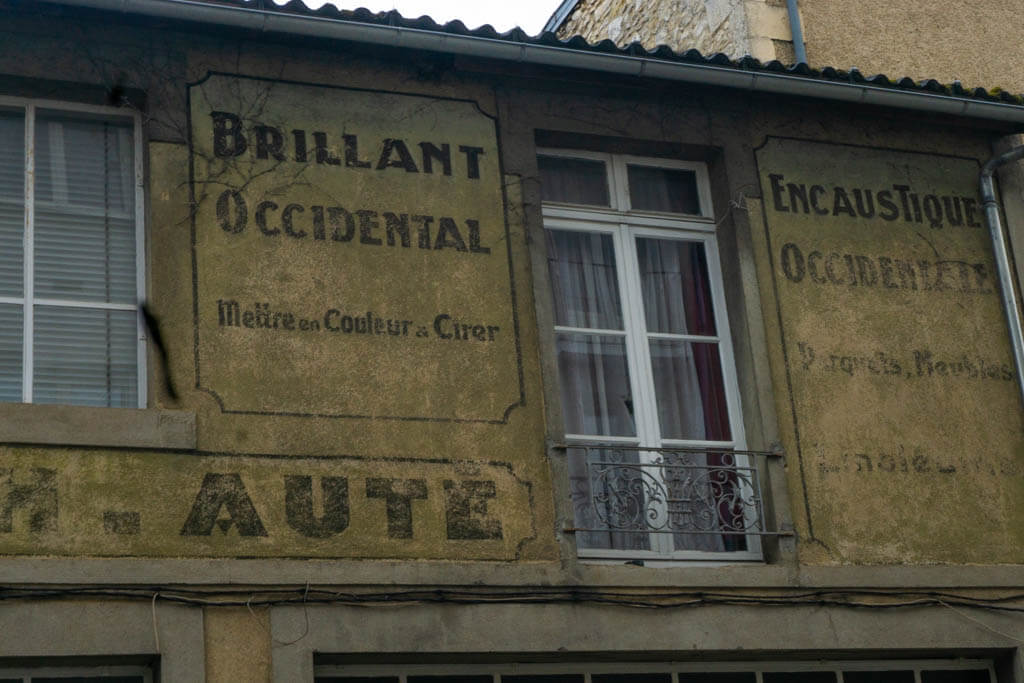 But now there’s a new landlord. The portly man who spent his days swabbing the stairs in pungent disinfectant is gone now. He never could understand a word I said so we didn’t connect much.

Steve and I popped down to the bottom of the hill where my old boulangerie is still cranking out the fresh baguettes and apricot tarts. (New name, same corner. Except it’s all organic now.) 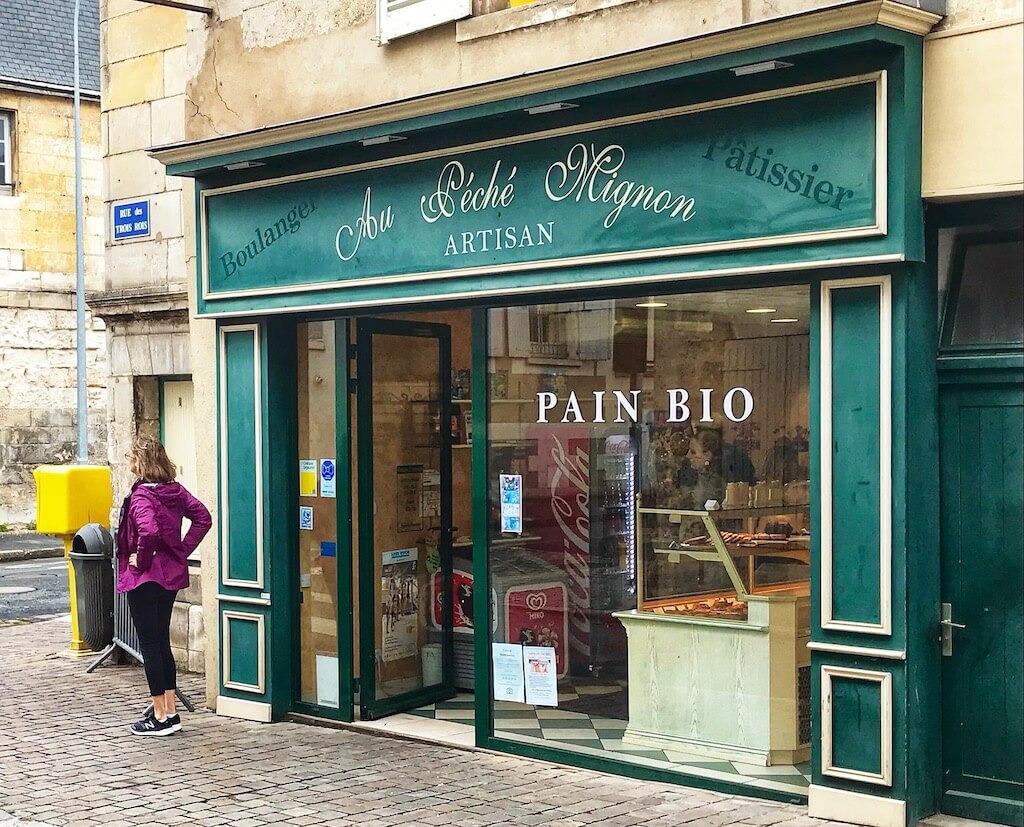 I lived mostly on bread and cheese in those days—I had a single sink and hot plate in my studio—so I knew exactly what time the baguettes were warm and just coming out of the oven…which was conveniently three times a day.

You could smell fresh baked bread on the street.

As we ambled through town, I kept looking for the law school where I’d spent my days. I could picture it in my mind but couldn’t place it on the map.

And then, we rounded a corner and all my memories POPPED IN TECHNICOLOR! 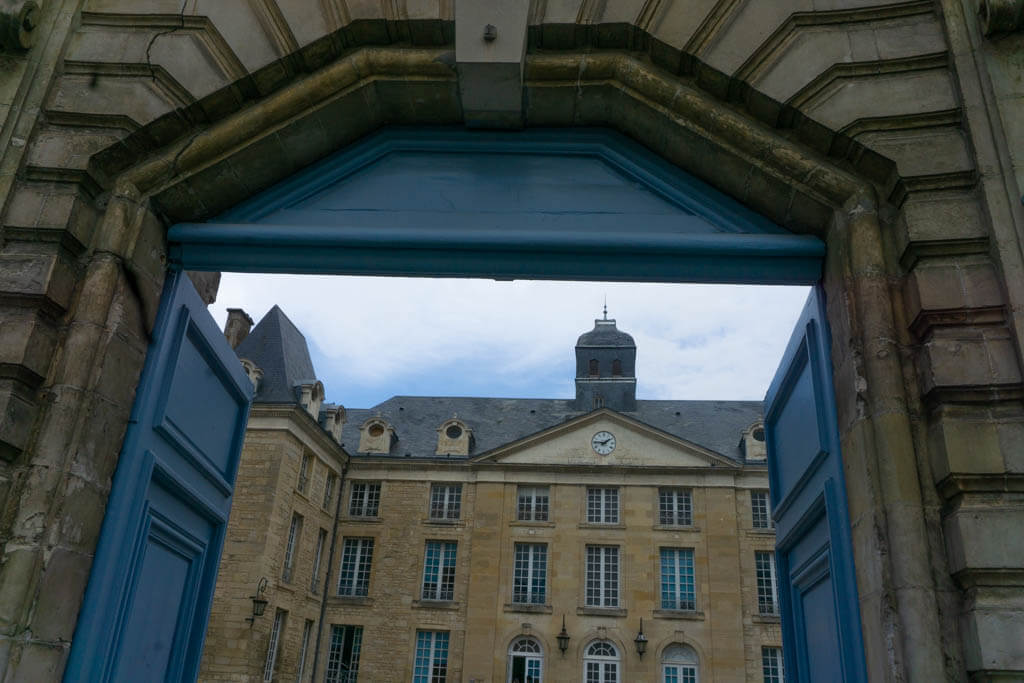 There was the law school where I took that class on the Cold War.

And just across the street was the best pâtisserie ever. The name’s changed but they’re still selling a delectable selection of pastry there! 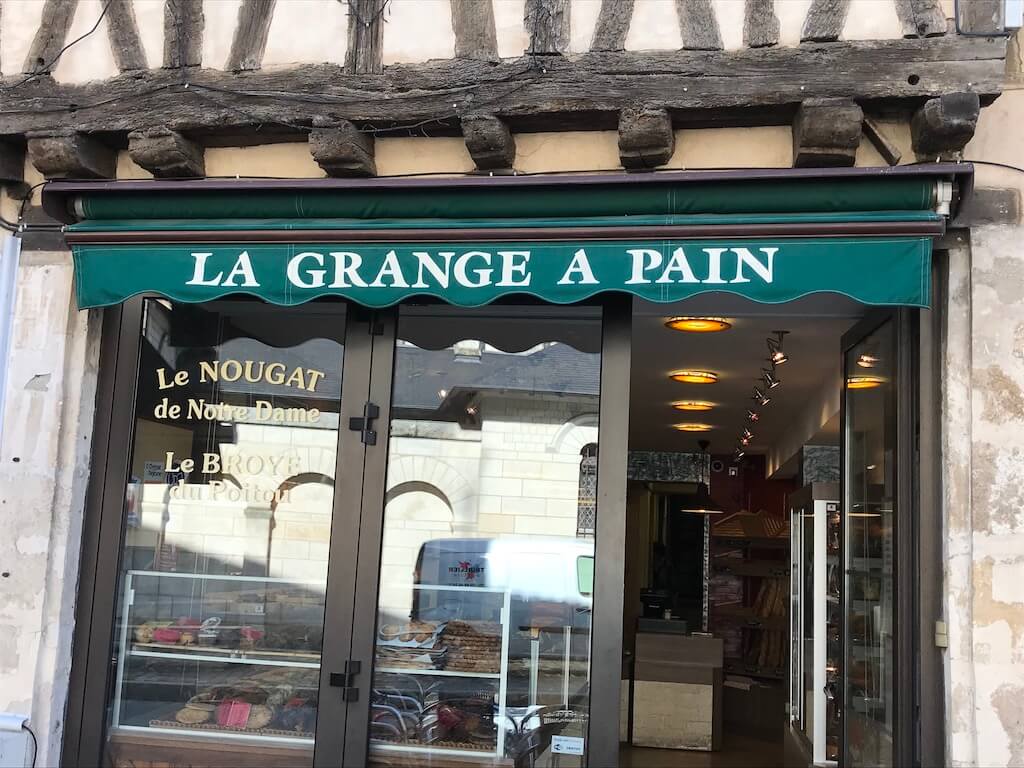 I swear my skinny French friend Sylvie lived on pastries and cigarettes that year. (Miss you, Sylvie, and wish we could connect.)

There was the bar where I had my first (and last) cigarette talking politics and slurping wine with the French copins that I did in fact, eventually meet. Having those very “if-we-could-change-the-world” late-night conversations I’d imagined. In fluent French, I might add.

But memory is a funny thing!

Just steps from the law school where I spent my days…literally on the way to that pâtisserie…lies the incredible Nôtre Dame de Poitiers Cathedral. 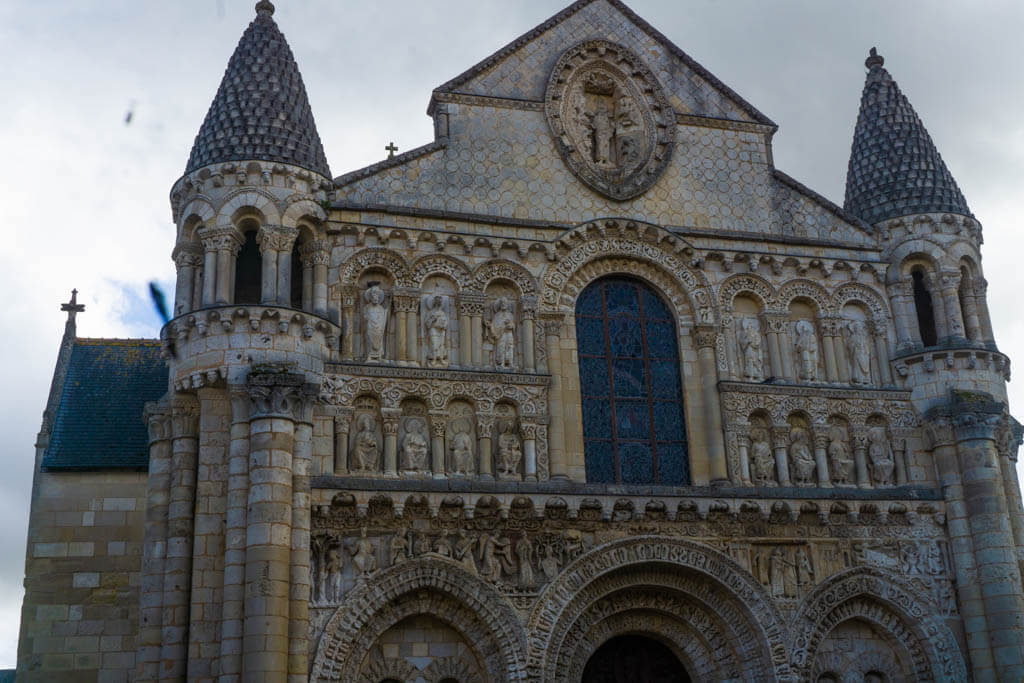 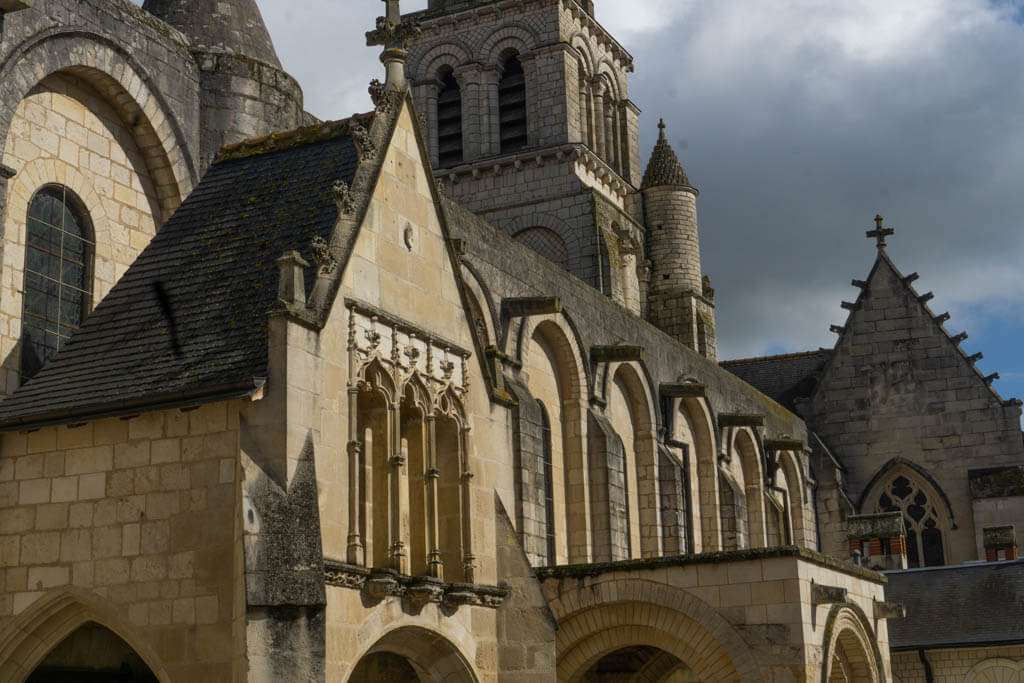 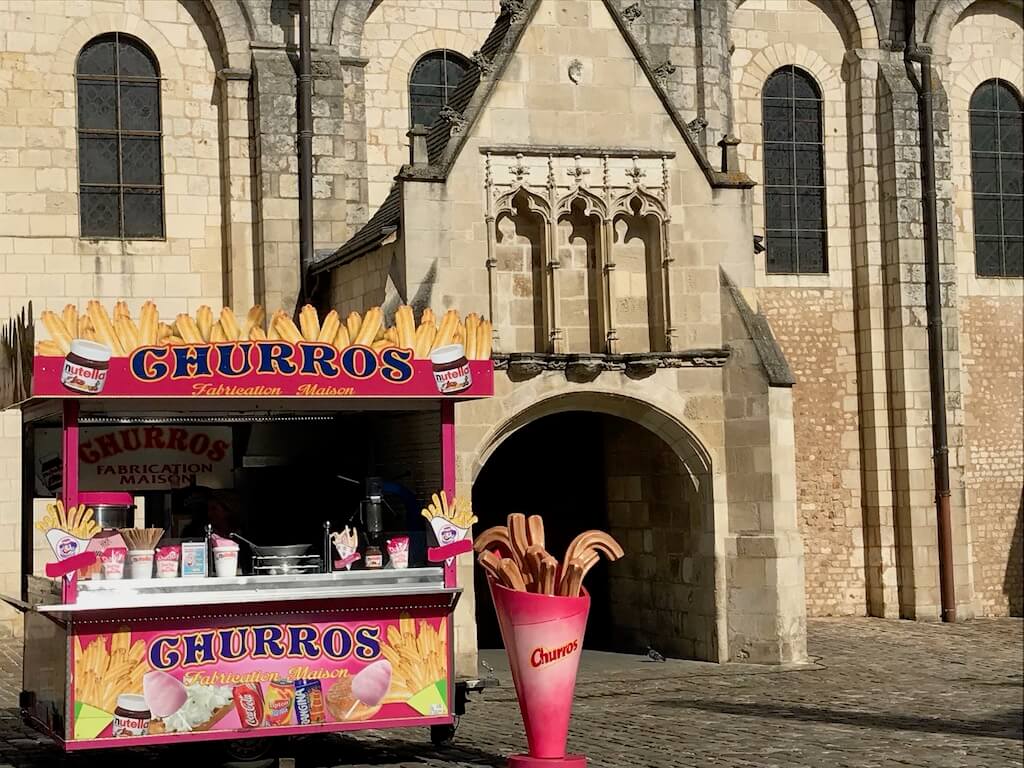 I have no memory of it.

Nôtre Dame La Grande is a Romanesque masterpiece. And it’s been on this very square since the 10th century, Wikipedia informs me. The colorful frescoes inside are mind-boggling beautiful.

But the only reason I know about them is because I ducked into the church 22 days ago.

How could that possibly be?

Have I somehow forgotten this glorious church? Or did I really never venture inside?

One thing I know for sure is that I’m a much more confident, exploratory me at 55 than I was at 21. I spent way too much time watching those icicles drip from my rooftop when I should’ve been bundling up and ducking into cathedrals. (Crappy flea market coat be damned.)

I’m a lot more willing to lean into discomfort when I travel these days. I’ll mangle a language I don’t know in my effort to connect with a taxi driver or smile instead of cringe when someone looks at me like I’m speaking Martian.

And I think I have my year in Poitiers to thank for that. 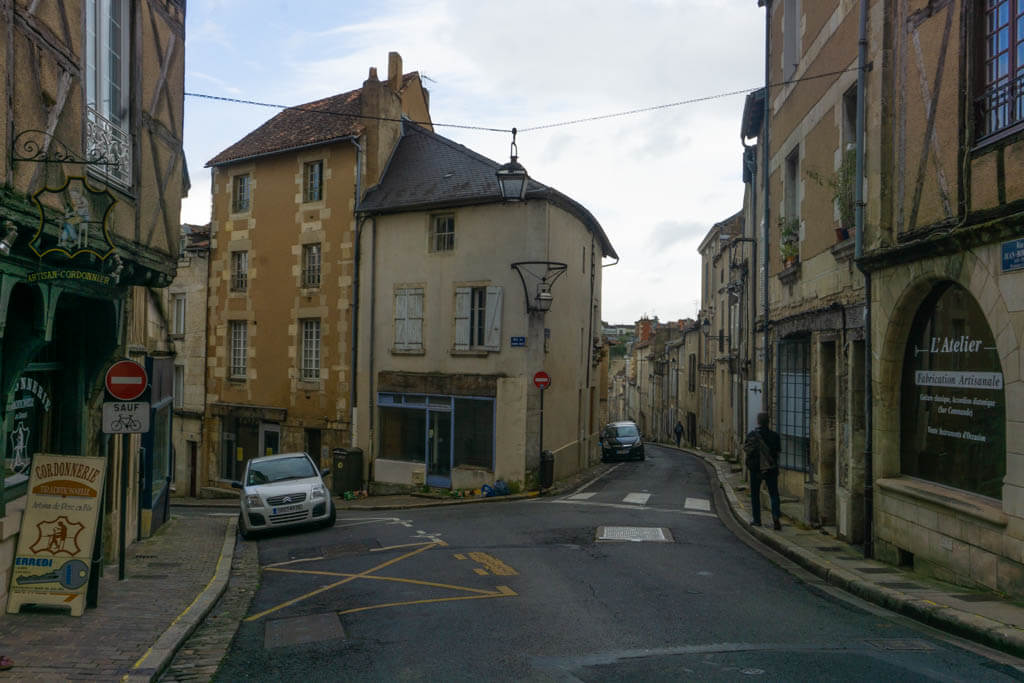 The loneliness of that year has paid dividends in all of my years since.

Sort of like planting a garden when the seeds haven’t sprung yet. That early exposure to learning how to be uncomfortable has helped me to panic less during many flavors of discomfort later.

I went to restaurants alone and films alone. I took overnight trains alone to meet friends in far-flung places. And I learned that I could always count on me.

When one of the young women from our exchange program returned home at Christmas that year, I was rabidly jealous. Homesickness peaks at Christmas for exchange students on a year abroad.

But I’m so grateful I stuck it out. All the very best things happened after that.

I got a chic French haircut that year and took to wearing monster-sized earrings (which is as close to fashionable as I’ve pretty much ever managed).

I spent some magical weekends at the homes of friends around France, including frequent weekends to Paris and New Year’s Eve in a Normandy Chateau owned by a French family I befriended.

It was in the last half of that year that I became fully French.

And when a stranger asked me just before I returned home where in France I was from because they couldn’t quite place the accent, well, it all seemed worth it.

Because I’d become at ease… in France. 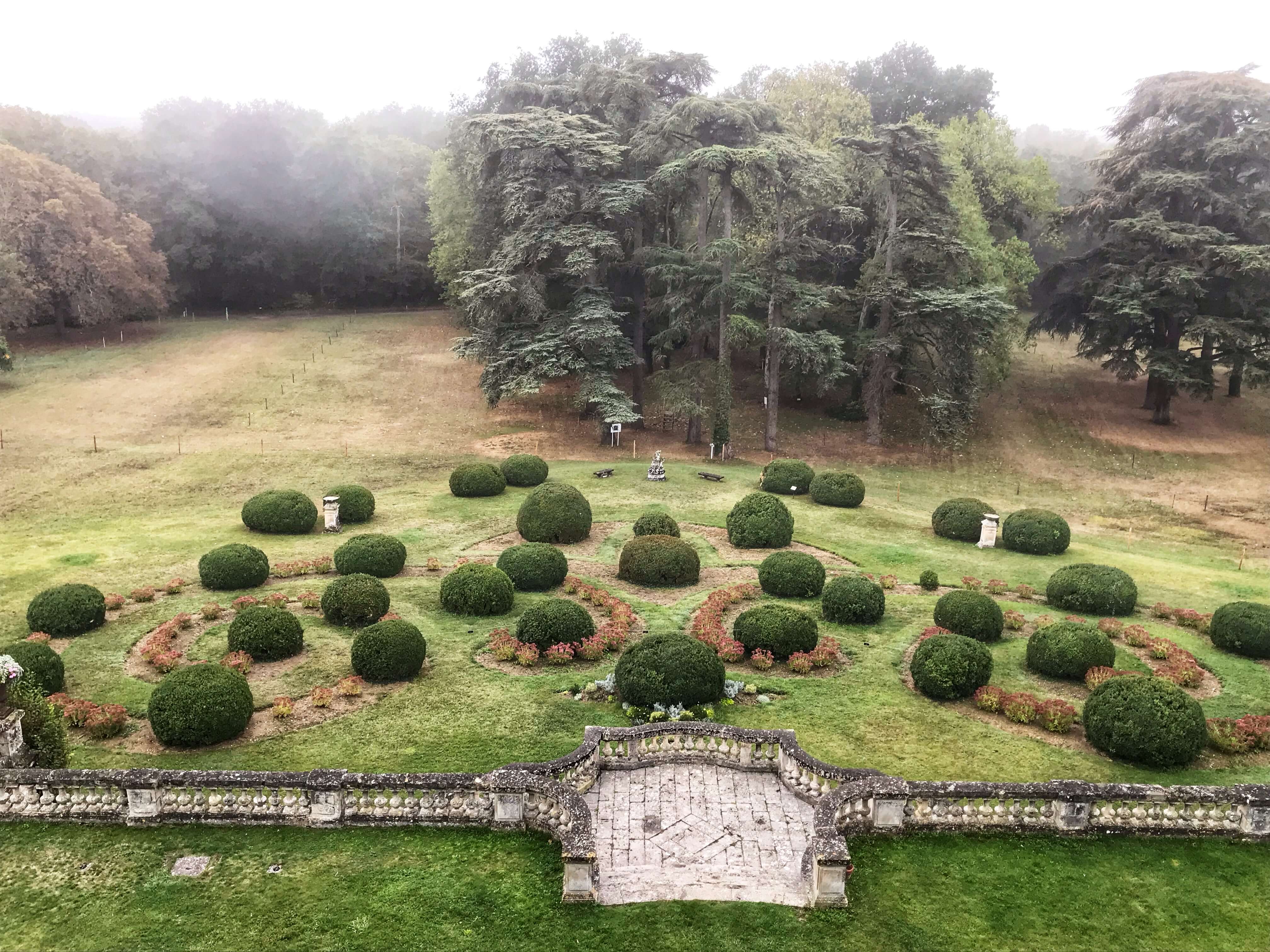