“On Sunday, there is no menu,” the waitress informed us with her eyes downcast and her hands in the air. “We serve family style.” We smiled. And our bellies rumbled.

We’d just arrived from a whirlwind drive—on an inspired route courtesy of the “local roads only” setting on our car’s nav—through a shimmering Aspen forest in Tuscany’s Monte Amiata. 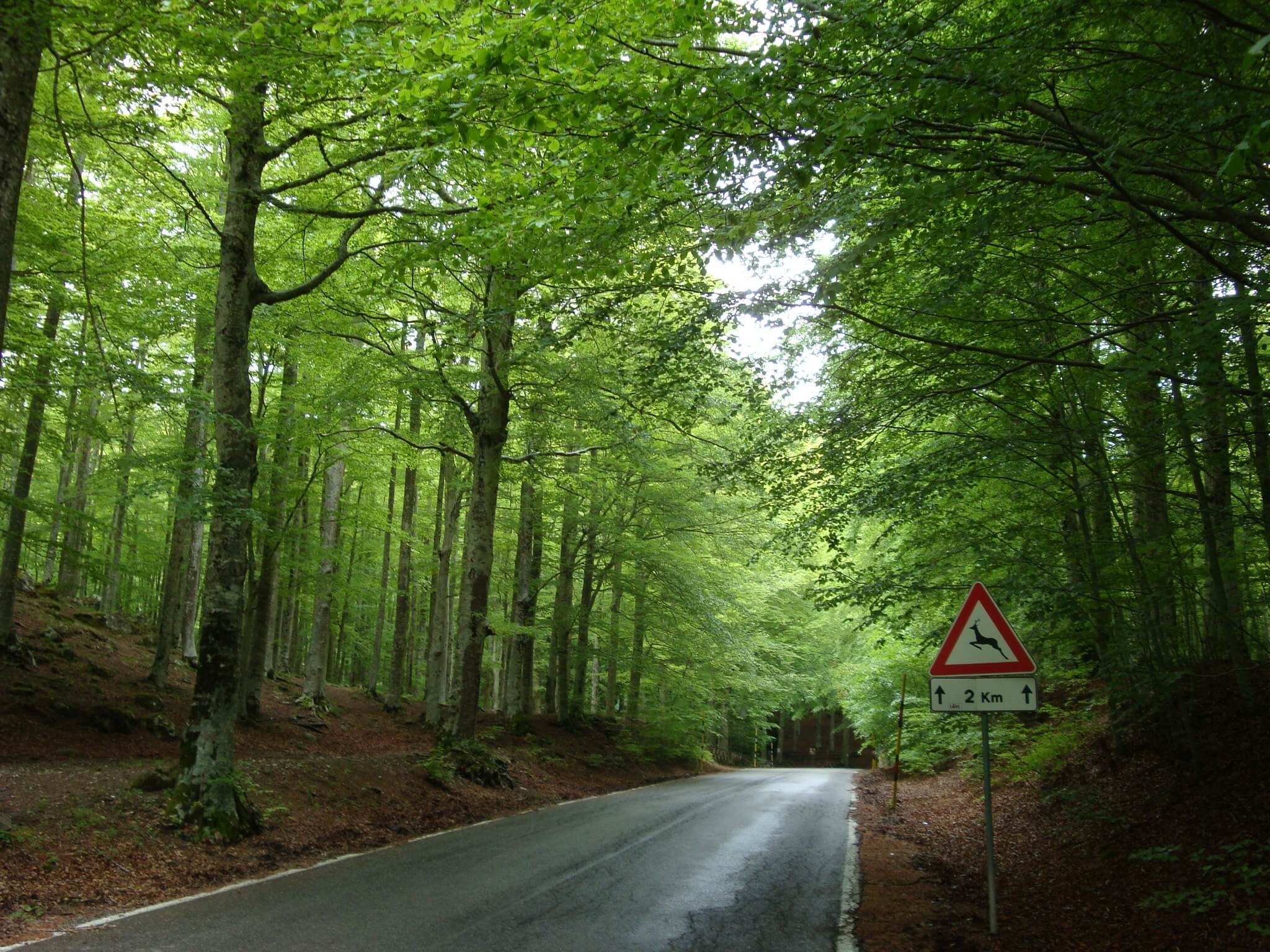 And there we remained at Ristorante Ana for the next three hours… well past the time when any person in his right mind should have begged for mercy and insisted, “Enough!”

Ristorante Ana is tucked away in a small, nondescript corner of Piancastagnaio (“Pee-on-Cast-an-Yow”), a barely pronounceable, workaday town in southern Tuscany. Far from the glamour of Florence and Siena—and the over loved hill towns of San Gimignano and Cortona—Ristorante Ana remains a pilgrimage for locals only (and Tuscans in the know).

It all started innocently enough, with big ladlefuls of steaming porcini-chestunut soup—thick, pungent, and earthy—and a generous pour of the red wine from the vineyard just up the hill. Monte Amiata is the chestnut capital of Maremma, after all, so it is perhaps not surprising that Ristorante Ana is practically famous for its well-guarded secret soup recipe. (I suspect potato.) 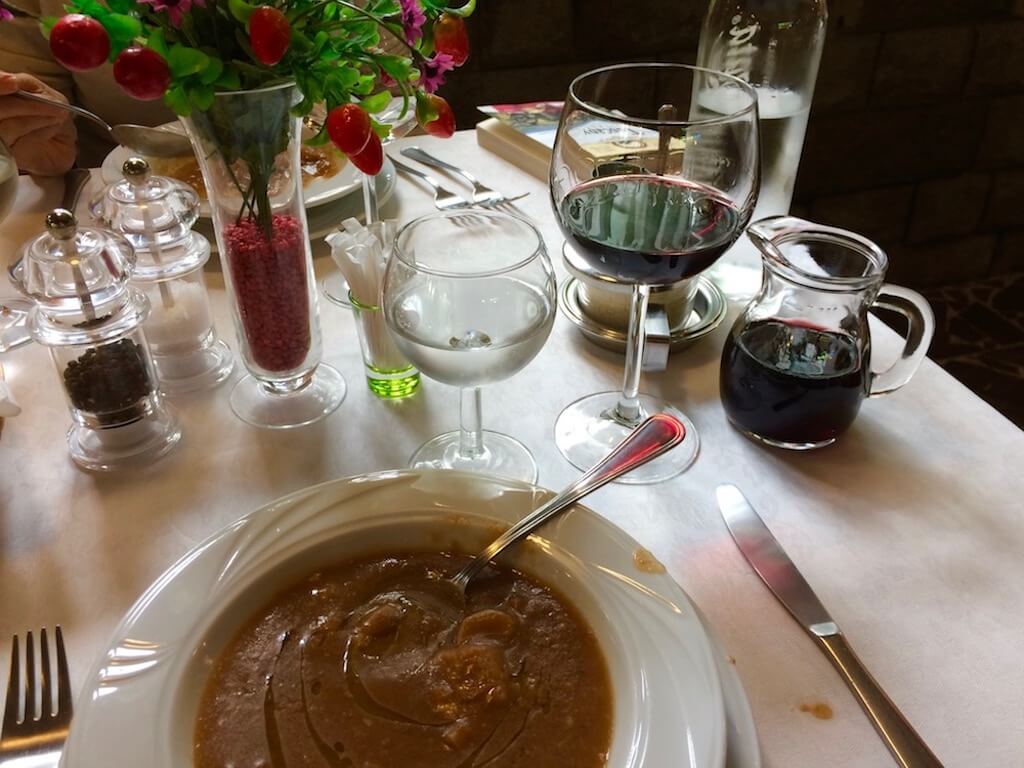 Just as we were ready to lick our bowls, they were whisked away as two new dishes arrived to replace them. In the center of each was a single, large ravioli, handmade, of course, stuffed with lemon and ricotta. A large dollop of artichoke pecorino topped each creation.

Lest we think one pasta course was enough, a beautiful plate of pici with asparagus and speck arrived next. These long, hand rolled noodles are a Tuscan specialty. In fact, the term “pici” derives from the term “appiciare,” which refers to the manual technique long-used by Tuscan peasants to form the noodles.

At this point, I hoped the meal was drawing to a close. But then two new dishes arrived: a wild boar ragout and a succulent morsel of fork tender pork with carmelized pear in a savory butter sauce. As I began to slow down, our waitress looked concerned.

“You do not like it?” she asked with furrowed brow as I picked at my pork. So I nodded vigorously and forged ahead with a next mouthful.

Only to find that an elegant glass bowl of tiramisu had been placed just outside my line of vision by another server when I wasn’t looking. I felt vaguely guilty for appearing less than enthusiastic…as if I was lunching at my favorite Italian grandmother’s house. And she’d cooked all day just for me. And now I was letting her down.

There is perhaps nothing quite as delicious as the lovely layered sponge cake soaked in espresso and bathed in mascarpone cheese and powdered chocolate that is tiramisu. Especially made by a nonna in Tuscany who’s been making it for a lifetime.

Except, for perhaps, biscotti? Just as I was sizing up my progress on the tiramisu, a plate of hazelnut cookies, “brutti ma buoni” (i.e., “ugly but goods”) appeared. Made simply of hazelnuts, sugar and egg whites with no flour, these lumpy and irregularly sized little biscuits are well-loved throughout Italy and disappear quickly, even though they’re not much to look at.

Before I knew what I was doing, I was dipping them in my red wine. As instructed.

Blessedly, and at long last, espresso—and a chestnut liqueur— arrived to punctuate the end of the meal. The tab? Just 65 euro for perhaps the most memorable meal of my life.

And so we waddled out of the restaurant with Montepulciano on our minds, amidst a chorus of well wishes and enthusiastic waves from our delightful hosts. 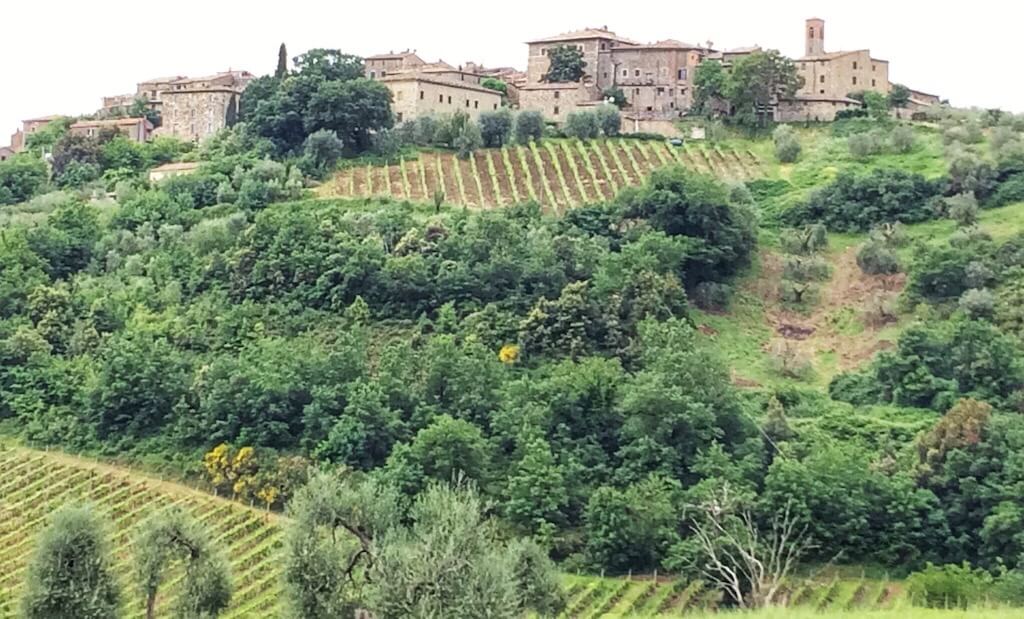