So we woke up to this on our first morning just outside of Pienza in the Val d’Orcia region of southern Tuscany. And it was just a stone’s throw from the stunning Val d’Orcia region. In fact, you can reach it in just two hours from Rome.

We were staying at Tenuta San Pietro, an adorable thirteenth century 12-bedroom inn, working farm, and vineyard nestled among the graceful rolling hills of Tuscany, just outside Pienza, in the province of Siena, Italy (which is also a great place to visit during your Italy vacation).

Agriturismo (or “Italian farm stays”) are Italy’s best kept accommodation secret. Sounds rustic, you say? Not necessarily. Whether you are looking for a luxury romantic getaway, a bare bones place to lay your head after a busy day of sightseeing or something in between on your Italy itinerary, there no doubt exists an agriturismo for every travel dream and budget.

Some include lovely meals for guests prepared onsite (and these can be swoon-worthy destination restaurants!) using organic vegetables grown in their very own garden. Others pour a prize-winning red for guests. Hosts may join you for an after dinner amaro by the fire or point you to a locals only restaurant you’d never spy in a guidebook. And many offer on-site cooking classes too. (Learn how to make pici—hand rolled Italian pasta—from a nonna who’s been serving it up for a lifetime!)

I guess they don’t know at Tenuta San Pietro that Italian breakfasts are rumored to be sparse because the breakfast buffet table on our first day (and every day after that) was piled high with goodies…an egg soufflé, prosciutto, fresh tomato wedges, a pear fruit salad, and three kinds of delectable Italian pastries. Have you ever had fresh squeezed juice made with orange, lemon, and carrot juice? Out-of-this-world delicious.

And that was just the appetizer for one of our most memorable days in Tuscany. It was the perfect Tuscany road trip.

Abbazia di Sant’Antimo, or The Abbey of Sant’Antimo is a former Benedictine monastery a hair south of Montalcino, just below the medieval hamlet of Catelnuovo dell Abate and a short drive from our digs. Sadly, there are just four monks who still live at this thirteenth century abbey likely founded by Charlemagne in the 9th century. I think I heard that the others have all moved to France. (I wonder if life is hard for monks in the 21st century. More community is better?)

Hearing the Gregorian chants in person was on my Italian bucket list so that was our plan at the abbey. Unfortunately, despite our best efforts, there was a change in schedule, and we arrived right in the middle of Sunday service instead. But. We were so not disappointed.

While I’m not really a church goer, I’m pretty sure I’d be attending services every Sunday at the abbey to commune with God if I lived locally. It was a mystical experience.

As I wedged open the heavy door to the chapel, I looked up sharply to see a Benedictine monk in a long white robe and sash reciting a liturgy near the altar. Clear white light streamed through the wide stone windows to illuminate him as his Latin words echoed off the walls and the incense swirled lazily from his hand up to the heavens. (Sadly, no photos allowed.)

A small a cappella choir of six periodically answered his words in song. And diminutive Italian grandmothers decked out in their Sunday best dotted the pews. I almost stopped breathing it was all so mesmerizing.

So you can imagine my brief disorientation a few moments later.

As we wandered back to the car with the chanting still floating through my head, an overstuffed carful of Italian teenagers roared passed…with ACDC’s “You Shook Me All Night Long” blasting from the radio through the peaceful countryside. They pulled up short, scooped up two more dark eyed beauties amidst curses and giggles, and were off again at a break neck pace. Italy today is a soul-satisfying study in contrasts.

Over the Meadow and through the Woods

Next up was lunch and I’d been anticipating this particular lunch at Ristorante Ana in off-the-beaten-path Piancastagno ever since I first read about it in the Little Roads Europe guidebook.

The surprise though was that the nav in our rental car took us there via Monte Amiata, which is actually a lava dome, of all things, that lasted erupted 300,000 years ago. If you are envisioning a volcanic landscape, you’d be super shocked to encounter these wildflower carpeted Tuscan hills.

One moment we were oohing and ahhing over the unending displays of red poppies, goldenrod, and pink wildflowers. The next, we were enveloped in a hug from this forest of majestic beech trees.

When I later asked locals about this forest, they nodded enthusiastically and explained that Monte Amiata is an area of Tuscany that many tourists don’t see. Chestnuts and timber are harvested here. A small ski resort crowns the peak. In fact, beautiful surprises like these are exactly the reason why we always set the nav in our car to choose small country roads when we drive between destinations in Europe.

Possibly the Best Meal We Have Ever Eaten 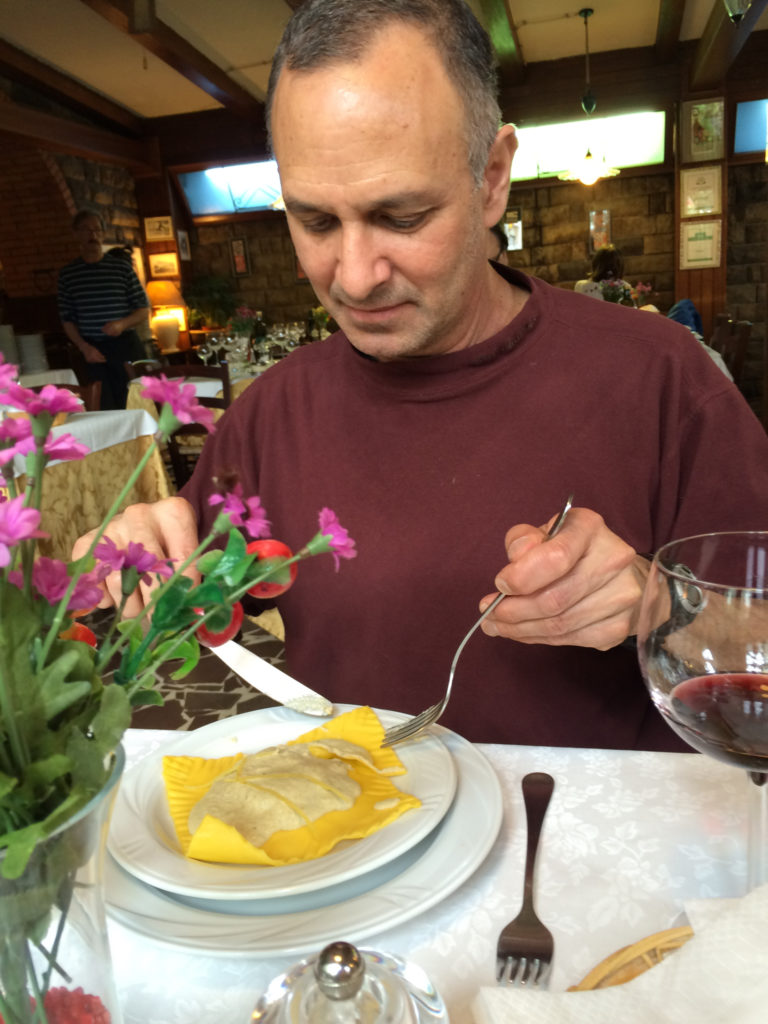 Steve and I are famous for planning our next meal before we’ve finished the last one. It’s what we do. (Plus, Steve’s been making homemade pasta for grateful friends for over 30 years now.) So when I tell you that our six course lunch over three hours at little Ristorante Ana ranks up there as a contender for best all-time meal, you should probably put this place on your list.

Piancastagno is not an especially scenic suburban workaday town…but you’re not here to see the sites. You’re here for the food! On Sundays (when we visited), there’s no menu. You just enjoy what everyone else is being served. You’ll spot all kinds of diners here…everyone from the solo gourmand to the local soccer team. Invariably, a middle aged man treating his mom to a civilized lunch. What you likely won’t see is any other tourists.

We started with a chestnut porcini soup that I’m still fantasizing about (Monte Amiata chestnuts no doubt!) and then moved on to a single large lemon ravioli filled with lemon and ricotta with a dollop of artichoke pecorino on top. Can you even?

After that, it was pici (those long, hand rolled Tuscan noodles I mentioned earlier) with asparagus and prosciutto, and then wild boar ragout. My overfilled stomach tried to opt out of the pork that capped the meal, but I lost the battle when I tasted the caramelized pear and buttery sauce.

Dessert was tiramisu and little biscotti (“Ugly but Goods” they were called) for dunking in wine. And the finale? Espresso and a house made chestnut liquor, of course.

Needless to say, we rolled ourselves into the car after that. The price of this feast? Just 65 Euros (about $77 USD). There are so many unique and affordable restaurants like these in small towns throughout Europe. You just need to skirt the mobs in big cities.

Don’t speak Italian? Worried about how you’ll communicate? Be brave. A smile is a universal invitation to connect.

Even though storm clouds were gathering ominously, we decided to risk a brief stop in one of Tuscany’s oh so scenic hill towns, Montepulciano, en route back to our agriturismo, to walk off our monumental meal. However, we only had time to stroll the steep spine of the village and peek into a few shops before quarter-sized hail burst from the sky. A gorgeous little town that deserves a return trip for sure. Many visitors to Tuscany base here…and with good reason.

By the time we returned “home” to Tenuta San Pietro, it was early evening and we (gasp!) wondered about a light bite for dinner so we decided to swing by a grocery store in nearby Pienza—another scenic little Tuscan Renaissance town a stone’s throw from our beds that night— for a few carrots and apples to gnaw on.

Possibly a bite of cheese or two.

When we arrived though, all the grocers were zipped up for the night…all except for a small convenience store with an exuberant proprietor, Alberto.

Since he’d just purchased the store, Alberto was eager for visitors and excited to meet a pair of Americans.

In fact, in no time, he had us tasting every Pecorino cheese in his small display case, while delivering a well-rounded and comprehensive education about this Tuscan cheese that has been feeding people since the Etruscans.

Some Pecorinos are young and buttery, while others are sharper and aged up to a year (“This is a ‘man’s cheese!’” he warned us.) Pecorino is practically a religion in the city of Pienza.

In fact, the beautiful cheesy aroma pretty much wafts throughout the town.

By the time we finally left, Alberto was stuffing broad beans and slices of aged salami in our paper sack (“No charge! A Tuscan specialty. You must try these!”) and urging us to come back tomorrow.

With Alberto, we had a new friend for life.

We capped this memorable day with a sunset picnic of sweet clementines and a bite of apricot tart (made by Alberto’s wife, of course) sitting and sighing on the “terrace” of Pienza. Next up: a cooking class in Tuscany!

Do you have more time to spend in this lovely region? Check out this one-week itinerary for Tuscany for inspiration.

Stay: Tenuto San Pietro or visit this site to see agriturismos across Italy.

Get Rick Steves Florence and Tuscany guidebook on Amazon here.

Disclosure: As an Amazon Associate I earn from qualifying purchases.

• Cooking in Tuscany: La Dolce Vita in a One Day Class