“You travel like an American,” my expat friend Sharon told me recently. And she’s right. Americans are shorter on vacation time than, say, Europeans (or pretty much most people…I recently read that Americans have the same amount of vacation as medieval peasants did). So we tend to dash all over on a trip in our quest to see the maximum we can before being thrust back into our workaday lives. Heck, we saw Normandy, Chartres, and the Dordogne among other places during out 16 days in France.

In fact, in a travel forum recently, I noted an American woman looking for recommendations on an upcoming trip to Europe. She said she had two weeks and hoped to see “a lot of Italy plus some things in Spain and France.” Right. Even I’m not that bad! (That’s like saying you have two weeks to see the U.S.…that you want to see a lot of California and New York state but be sure to fit in some national parks and sip some sweet tea in the south.)

Still, I like to think of it as “sampling” a country. I’m hoping someday when Steve and I are no longer slaves to our jobs, we will know exactly where we want to go back…on a house sitting gig or home exchange for a month—or six—perhaps.

So when Steve announced recently that he was headed to Regensburg—the best preserved medieval town in Germany— for a week at his company’s satellite office, I did the only sensible thing. I promptly bought a plane ticket and booked an Airbnb for us smack in the middle of cute, cobblestoned  Old Town so I could come along! Regensburg is one of the most beautiful cities in Germany.

While Steve was at work, I worked too. In the mornings, I pecked away at my keyboard on a  book ghostwriting project at the table in our historic third floor apartment, listening to the city wake up below me. Shouts from the workmen, kids headed to school, and restaurants readying for the lunch crowd.

At noon every day, I put away the laptop, ambled down the three sets of stairs and went looking for lunch. That’s how I got to know the waitress at Hemingway’s, a cute little bar directly below us.

For 5 or 6 euros, I could also walk into the platz around the corner and indulge in a fabulous lunch of Bavarian sausage, sauerkraut, and a giant pretzel. (Specify your mustard preference please: Sweet or spicy?)

A bonus: Communal standing tables made it easy to chit-chat with locals in town shopping for the day and workers grabbing a quick bite.

And then, after lunch most days, I set about exploring this gorgeous little town set right on the edge of the Danube River. No rush to hit the highlights, in true slow travel style.

Regensburg Cathedral is the jewel of the city. In fact, whenever I lost my bearings on the tiny, winding cobblestone streets, I’d just look up to search out its steep Gothic spires and know exactly where I was. Super convenient.

The cathedral was built around 700, and then rebuilt in High Gothic style after a fire in 1273. It’s home to a wonderful choir (the “cathedral sparrows”, in English) and is the resting place of all manner of important bishops through the ages.

This place looks pretty benign, right? You might even say…beautiful and welcoming?

Today, the buttery building to the left is a helpful Tourist Information Office. The ornate doorway to the right is the entrance to Regensburg Old Town Hall, which has been welcoming dignities from around Europe since the 13th century!

Regensburg is an Imperial town, that is to say, it was a self-ruled city but still subordinate to the Holy Roman Emperor. And in this very town hall, princes from across the Roman Empire gathered to solve huge political crises behind closed doors and vote on important issues of the day.

But here’s the thing…In the bowels of the Old Town Hall is a an actual torture chamber! An interrogation chamber with a one-way mirror. Racks. And all manner of scary devices!

Including a dark cell for drunken nobles (and those awaiting a last meal of stew and beer before kneeling before the hangman).

Sure, arguing women might just be pilloried outside in the town square for a while. But arson? Murder? Coin forgery? Punished by immediate execution.

And if the accused weren’t so quick to confess, some of those lovely devices (above) usually did the trick. Eek!

One of the best things to do in Regensburg is to enjoy a leisurely stroll across the city’s famous 12th century Old Stone Bridge. For more than 800 years, this bridge over the Danube was the only way to get from Old Town over to the district of Stadtamhof.

Spring had sprung in Bavaria when we were there in May so the air was filled with the scent of charcoal and sausage and laughter as college students barbecued on the river banks. (And lots of squealing brakes from rampant bicycles everywhere!)

The biergartens were a doing a booming business, too. We spent one delightful evening with Steve’s colleagues at a biergarten right on the riverfront.

I was in awe watching the server heft one DOZEN huge beer steins all at once! I actually tried to snap a photo of him doing it, but he thought I wanted him to take a photo of our group so he quickly delivered everyone’s beer to free up his hands so he could oblige.

Clearly, he had no idea how remarkable it was to this American that he could heft all those brews in a single go!

Sampling All the Deliciousness

Bavarian food is delicious, but heavy, so I was delighted to find incredible salads everywhere I went to balance things out.

In my wanderings, I popped into bakeries too.  I like to always ask bakers, “What is the specialty that comes from here?” In Regensburg, I heard about these pastries and embarked upon a little taste test. It was a tie: both were delicious.

Then I headed over to Cafe Prinzess, which was Germany’s very first coffee house in 1686. Today, it’s famous for its chocolates. And they did not disappoint. (Better than all the Swiss chocolate I tried in Zürich even!)

I’d come around a corner only to find an incredible mural…three stories high: 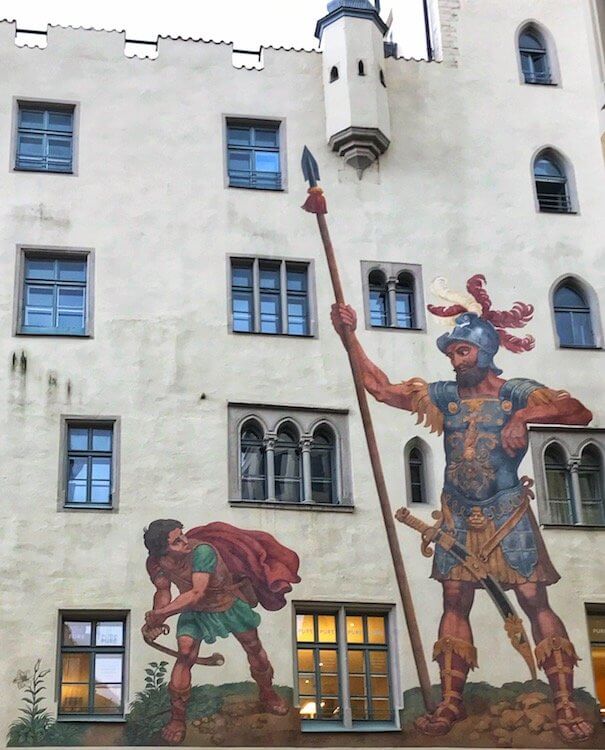 or some vestiges of Roman ruins!

This is a remnant from “Castra Regina”, or “fortress by the river Regan”, established during the Roman Empire to protect the Roman’s northern frontier in 179 AD/CE.

In fact, Emperor Marcus Aurelius stationed 6,000 of his soldiers here at the fortress to ward off any northern German tribes that might want to invade.

At one time, this fortress covered 60 acres(!) and included 18 towers, four double wide gates, barracks, a military hospital and more.

Today, it’s a free open air museum you can wander through. If these stones could talk, huh?

On our last day in Regensburg, we visited the incredible Walhalla Memorial, just outside of Regensburg. The memorial is essentially a “hall of fame” (housed in a neoclassical building) to honor German (and other) celebrities. It was built in the mid-1800s and includes more than 2,000 busts, paintings, and plaques.

It’s not so much a “must-see” museum, as an impressive monument with a beautiful view of the Danube, as it sits high on a hill. Ideally, you’d bicycle here straight from Regensburg along the Danube (but rental bicycles were all sold out on the day we wanted to visit). The bicycle path is flat and scenic, but bring a bike lock and prepare for a serious hike up the hill at the end.

All in all, our week in Regensburg reminded me of why I love slow travel…it’s the very best way to settle into the rhythm of a place. But it would also make for one of the best German city breaks or a romantic weekend away as well.

Fingers crossed we make it back for the Regensburg Christmas market and a visit to nearby Nuremberg soon!

And if you’re also spending time in Bavaria, don’t miss beautiful Munich or these day trips from Munich! Or, for more off-the-beaten path destinations in Germany, check out this Europe travel bucket list!

When you subscribe to my monthly newsletter, you'll also be able to download a FREE list of my top 7 travel apps. No spam ever. Unsubscribe at any time.

You have Successfully Subscribed!